When it comes to nutritious food, you can’t beat seasonal produce. Every month of the year brings with it a new offering of nutrient-dense veggies and fruits, as well as meat and seafood. Find out what seasonal foods to cook with your Instant Pot in May to lock in the most flavor and nutrients. 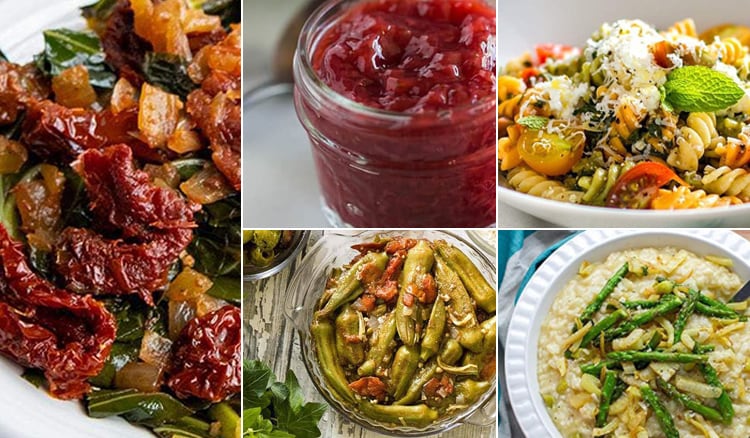 Next up: What To Cook In You Instant Pot In June

What’s In Season In May 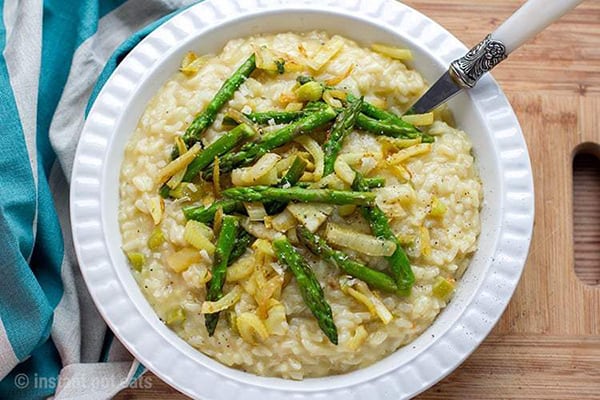 Asparagus is a perennial flowering plant with the folk name sparrow grass. Its young shoots are used as a spring vegetable. Once the buds start to open (“ferning out”), the shoots quickly turn woody. Stem thickness indicates the age of the plant, with the thicker stems coming from older plants. Water makes up 93% of its composition.

Asparagus is low in calories, carbohydrates and is very low in sodium. It is a good source of calcium, magnesium, and zinc, and a very good source of dietary fibre, which is great for our gut health.

Depending on where you buy the asparagus, the bottom portion of the stems can contain sand and soil, so thorough cleaning is advised. The bottom part of the stems is usually tough and stringy, so cut the ends off before using.

The shoots are prepared in a number of ways around the world. In Asian-style cooking, asparagus is often stir-fried. It may also be quickly grilled,  pickled and stored for several years, or eaten raw in salads. When it comes to pressure cooking, asparagus works great in Instant Pot soups, risottos, pasta dishes, and curries. 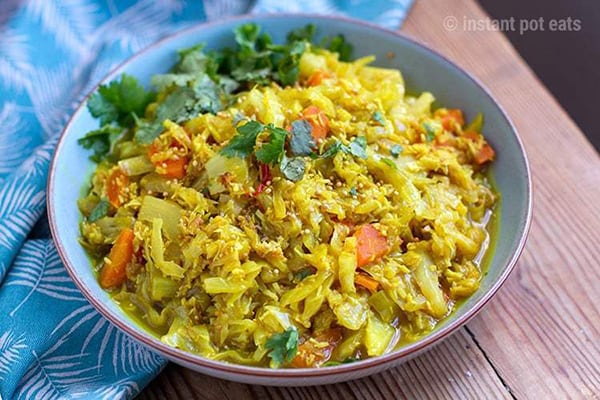 Cabbage is a rich source of vitamin C and vitamin K amongst other nutrients. It’s another vegetable high in fibre, which is why raw cabbage can sometimes cause a bit of flatulence. Nevertheless, it has many health benefits and research suggests that cruciferous vegetables, including cabbage, may have protective effects against cancer.

Cabbage is prepared and consumed in many ways from raw salads such as coleslaw to braised dishes such as cabbage rolls and cabbage soup. Pickling is one of the most popular ways of preserving the cabbage, creating dishes such as sauerkraut and kimchi.

Cabbage is great for pressure cooking as it can withstand high temperatures quite well and for many dishes, it requires longer cooking times. Braised cabbage dishes, stews, and soups with cabbage are best suited to the Instant Pot, however, you can also use the Sauteé function to stir-fry thinly sliced cabbage in some butter and garlic for a simple side dish. 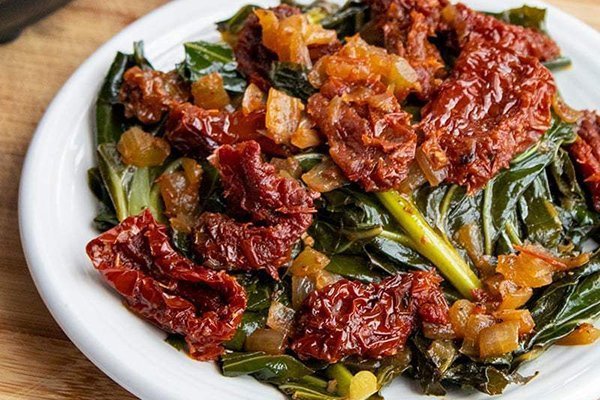 It’s no news that leafy greens are good for you. We’re talking kale, spinach and collards here. Naturally gluten-free, all leafy greens are low in calories and carbohydrates yet can be quite satiating when consumed with a little added fat, which helps with vitamin absorption.

Both kale and collard greens contain substantial amounts of vitamin K and are rich in vitamin A, vitamin C, and manganese, and moderate sources of calcium and vitamin B6. Leafy greens are also high in iron and provide dietary fibre. Being low in calories and sugar, leafy greens are great for weight loss and healthy eating.

Depending on the hardiness of the leaves, greens can be cooked in a variety of ways. Spinach and other thin-leaf green veggies are great raw, while tougher kale and collards are best cooked.  Instant Pot is great for cooking collard greens and kale as a side dish and you can add leafy greens to any stew, soup, curry, pasta or risotto you make in the pressure cooker. 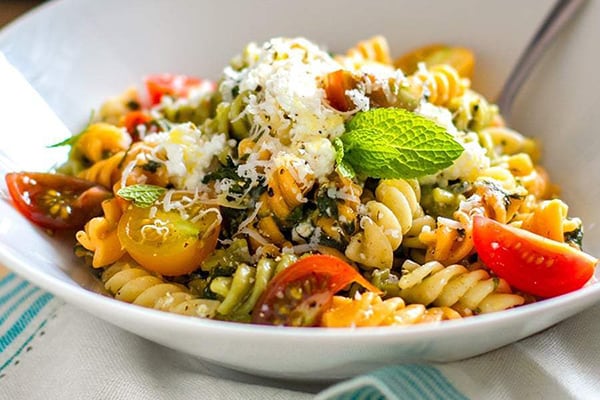 Raw spinach is 91% water, 4% carbohydrates, and 3% protein. A 100-gram (3.5 oz) serving provides only 23 calories, and spinach has a high nutritional value, especially when fresh, frozen, steamed, or quickly boiled. It is a rich source of vitamin A, vitamin C, vitamin K, magnesium, manganese, iron, B vitamins, riboflavin, vitamin B6, vitamin E, calcium, potassium, and dietary fibre.

Fresh spinach is sold loose, bunched, or packaged fresh in bags. Fresh spinach is packaged in air, or in nitrogen gas to extend shelf life but loses much of its nutritional value. While refrigeration slows this effect to about eight days, fresh spinach loses most of its folate and carotenoid content over this period of time. For longer storage, it is canned or blanched or cooked and frozen. Frozen spinach can be stored for up to eight months.

Spinach doesn’t need much cooking but it works well both raw and well-cooked. It can be added to soups at the last minute or you can cook it longer in a stew so it incorporates into the sauce. We love it in Instant Pot risottos and pasta dishes, and it’s a great addition to vegan and vegetarian dishes. 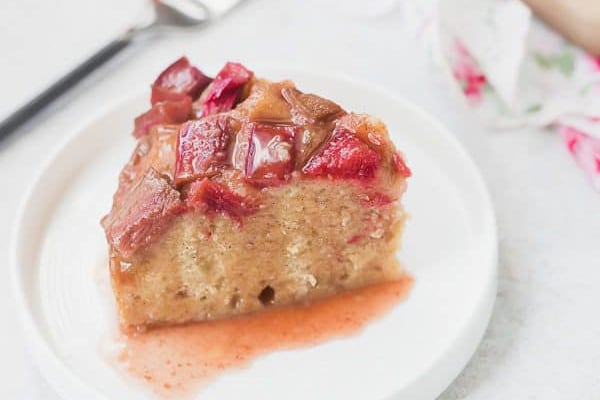 The color of rhubarb stalks can vary from crimson red to speckled light pink, to simply light green. Although rhubarb is a vegetable, it is often put to the same culinary uses as fruits.  The stalks can be used raw when they have a crisp texture (similar to celery). Otherwise, they are often cut into small pieces and stewed (boiled in water) with added sugar, until soft. Little water is added, as rhubarb stalks already contain a great deal of water.

Rhubarb is often paired with strawberries and is used in pies, tarts, crumbles, compote, and fruit wine. They have a strong, tart taste but delicious too. Instant Pot is great for making cakes and pie fillings as well as compotes and stewed fruit.

By the way, rhubarb leaves contain poisonous substances, including oxalic acid, which is a nephrotoxic acid. 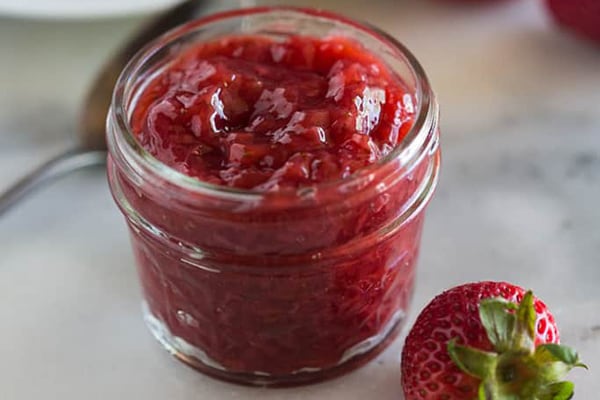 Who doesn’t love strawberries? We always get excited when they come into season!  One serving of strawberries contains approximately 33 kilocalories, is an excellent source of vitamin C, a good source of manganese, and provides several other vitamins and dietary minerals in lesser amounts.

A strawberries sweetness, fragrance, and complex flavor are popular characteristics so they are used in manufacturing beverages, confections, perfumes and cosmetics. In addition to being consumed fresh, strawberries can be frozen and/or be made into jam, as well as, dried and used in prepared foods, such as cereal bars.

When it comes to pressure cooking, you can’t go past a good strawberry jam recipe. Cakes, cheesecakes, oatmeal, compotes and pie fillings with strawberries are also great to make with a pressure cooker. 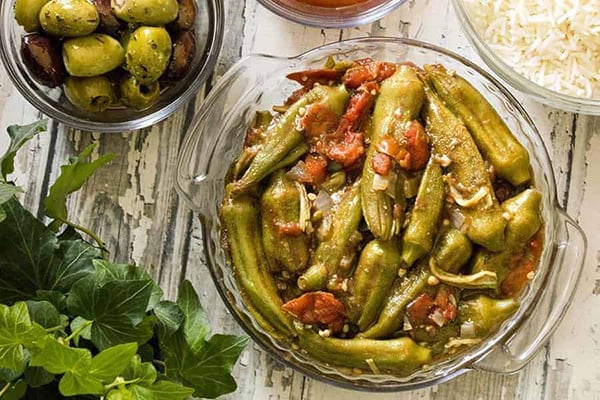 Okra pods are cooked, pickled, eaten raw, or included in salads. You might have noticed that a certain amount of cooking will produce okra “goo” or slime which a mucilaginous product of the plant and nothing to worry about. Soaking okra in water before cooking is believed to reduce the amount of slime produced.

For a full list of what’s in season in May in the USA, check out this post: What’s In Season Around the Country: May 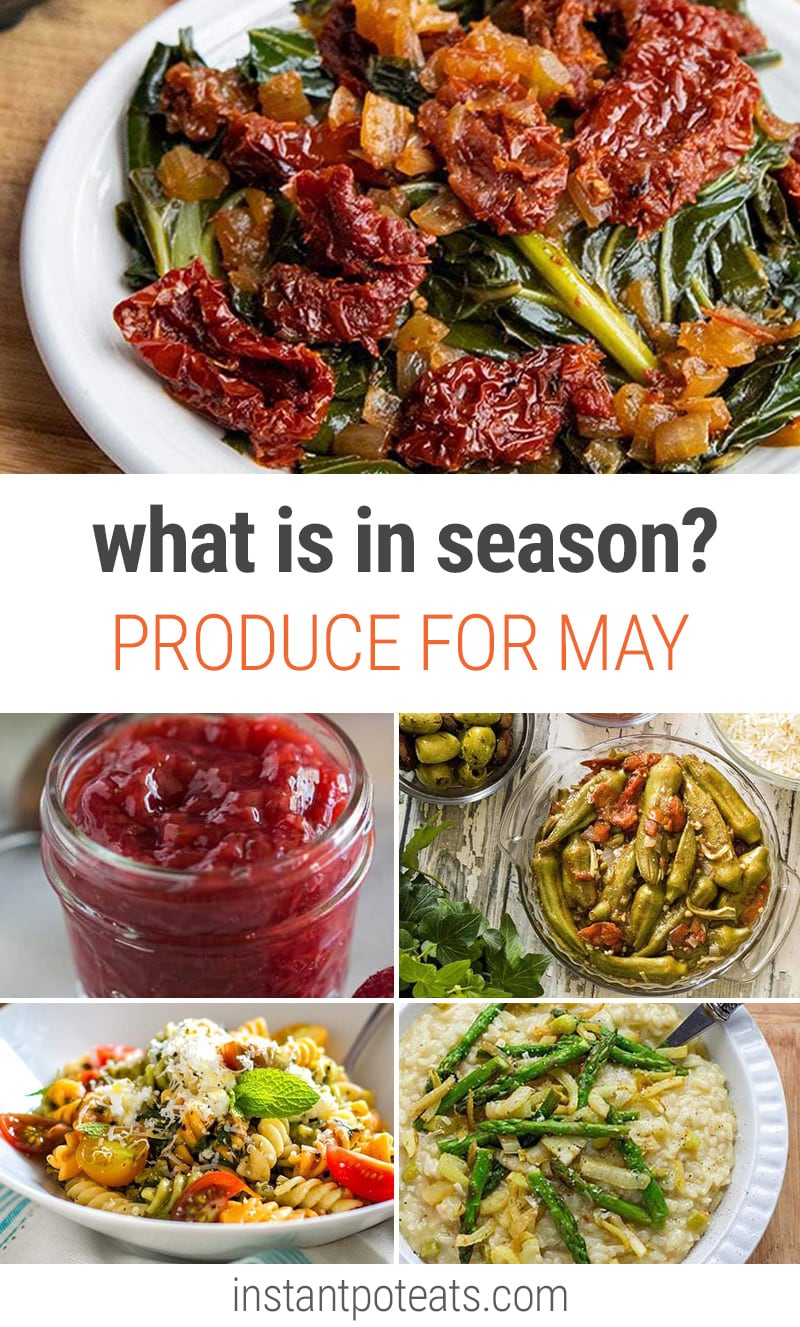