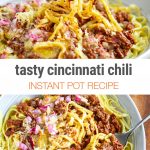 Learn how to make a homemade version of Instant Pot Cincinnati chili – a Mediterranean American fusion meat sauce – served over hot spaghetti or linguine and topped with shredded cheese and pickled onions. Bring a taste of this iconic diner dish to your family and friends. Please note, this is an adaptation of a classic dish with ingredients you have at home so it’s not exactly the same you might get at a diner (e.g. we used red onions instead of white and linguine over spaghetti as that’s what we had around). 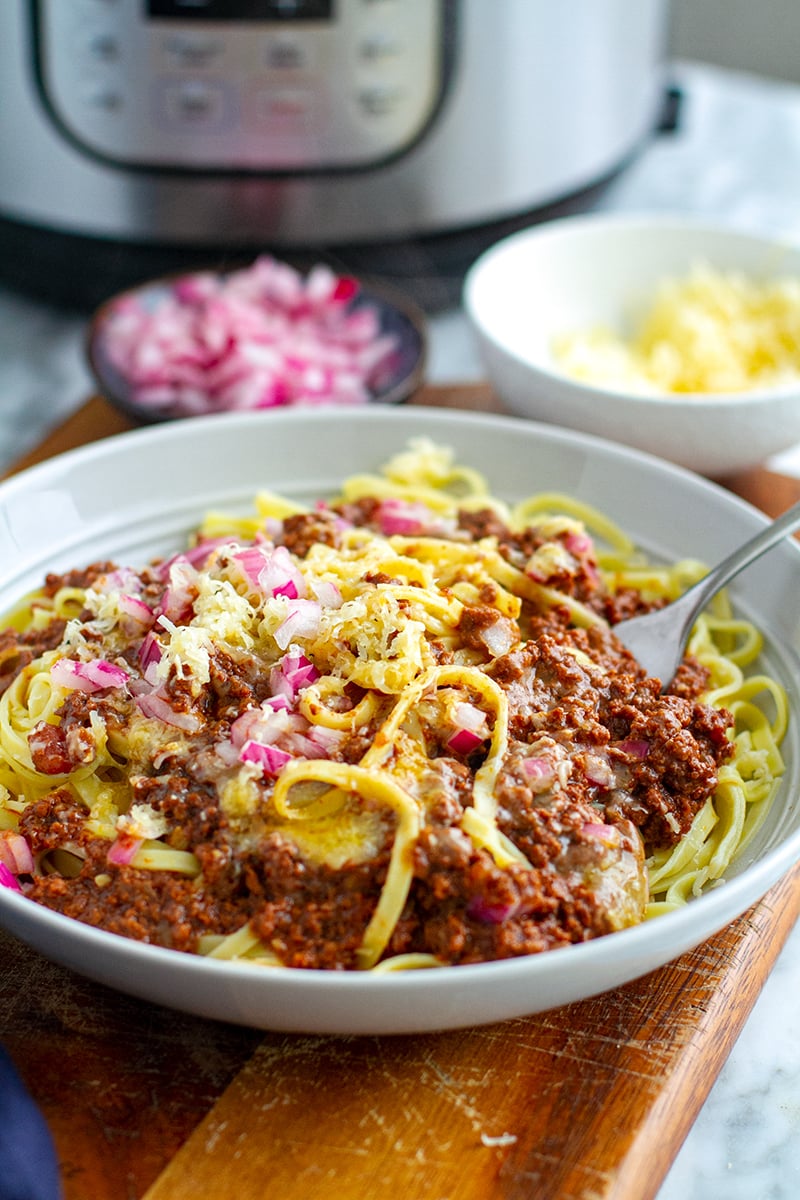 Cincinnati chili meat sauce is a great recipe to cook in the Instant Pot as you can throw in all the ingredients and set to cook and forget for a while. The sauce is usually slow-cooked for a long time but the pressure cooker speeds up that process resulting in equally rich and well-developed flavors in a fraction of time.

What is Cincinnati Chili?

Cincinnati chili is a rich and hearty meat sauce similar to a regular chili con carne or a Bolognese with added spices of cinnamon and allspice, Worcestershire, lots of tomato paste, a touch of vinegar and in many cases some dark chocolate. Made with ground beef, this sauce is braised for a long time and cooked down to thick, aromatic, complexly and beautifully flavored chili.

It was developed by Macedonian Greek immigrant restaurateurs in the 1920s but has gained so much popularity over the years that it is now considered one of the most iconic foods in America. The dish is the Cincinnati area’s best-known regional food, and that’s where it has drawn its name. 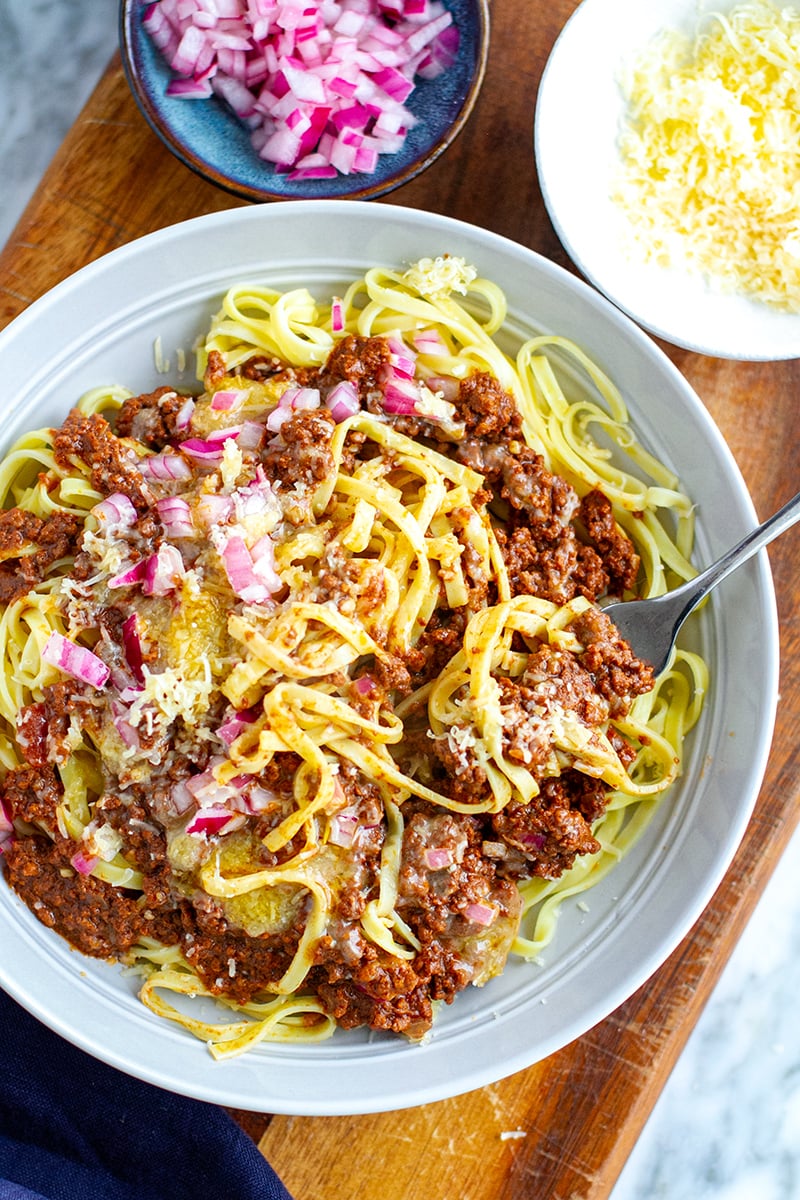 HOW TO SERVE CINCINNATI CHILI

In chili parlours and diners, the Cincinnati chili is usually served using the “ways” system:

Some places will serve the dish “inverted”: cheese on the bottom, so it melts. The Cincinnati-style meat sauce can also be served on hot dogs with mustard, onions and a heap of cheese.

In our recipe, we are serving Cincinnati-style meat sauce over cooked linguine pasta, topped with a mix of Cheddar and Parmesan cheese (you can use any style cheese you like or have) and lightly pickled red onions. which is a nice twist on raw onions but you can keep it simple.

HOW TO MAKE CINCINNATI CHILI IN THE INSTANT POT

You will find the full list of ingredients, instructions and nutritional breakdown for this meal in the recipe card below. Here is a handy video showing you how to make this Cincinnati recipe in the Instant Pot. 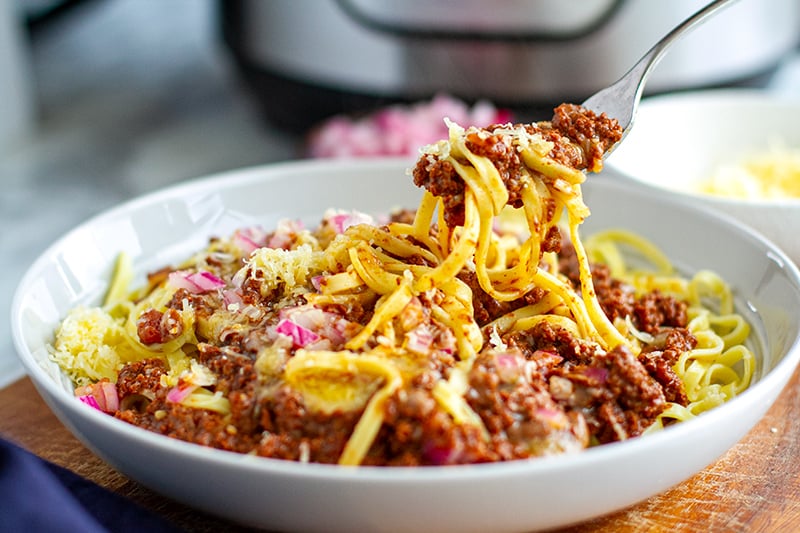 Hearty and rich Instant Pot Cincinnati chili meat sauce is great over spaghetti or linguine pasta and topped with grated cheese and raw onions (or lightly pickled in our case). It’s an iconic American-European fusion dish that will quickly become a family favorite.

To serve the sauce:
Cooked spaghetti or linguine

Grated cheese (we used a mix of Cheddar and Parmesan)

Optional: cooked red beans (can be out of a can)

Pickled red onions: Combine 1 finely diced red onion with 2 tablespoons white or apple cider vinegar, 2 tablespoons water, a pinch of salt and sugar and set aside to pickle for 10-15 minutes or while the sauce is cooking.

SAVE THIS INSTANT POT MEAT SAUCE RECIPE TO PINTEREST 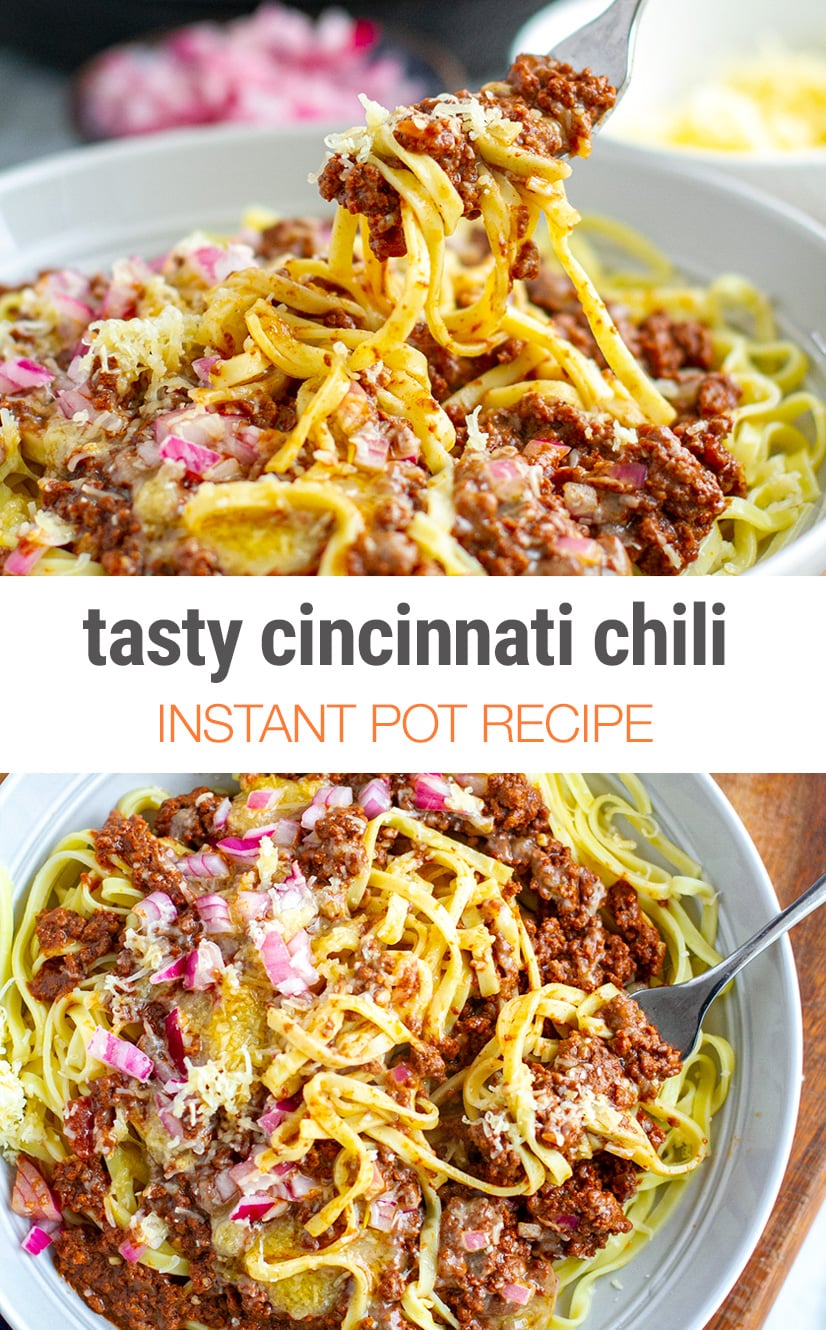