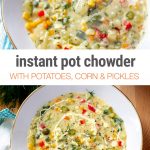 This chunky, creamy Instant Pot chowder is loaded with vegetables, including potatoes and sweet corn, and is thickened with cheese, cream and gluten-free starch slurry made with tapioca flour. We got inspired by a dill pickle soup and added a twist of finely diced gherkins and fresh dill right at the end. They add freshness and little bursts of flavor taking this classic soup to the next level. 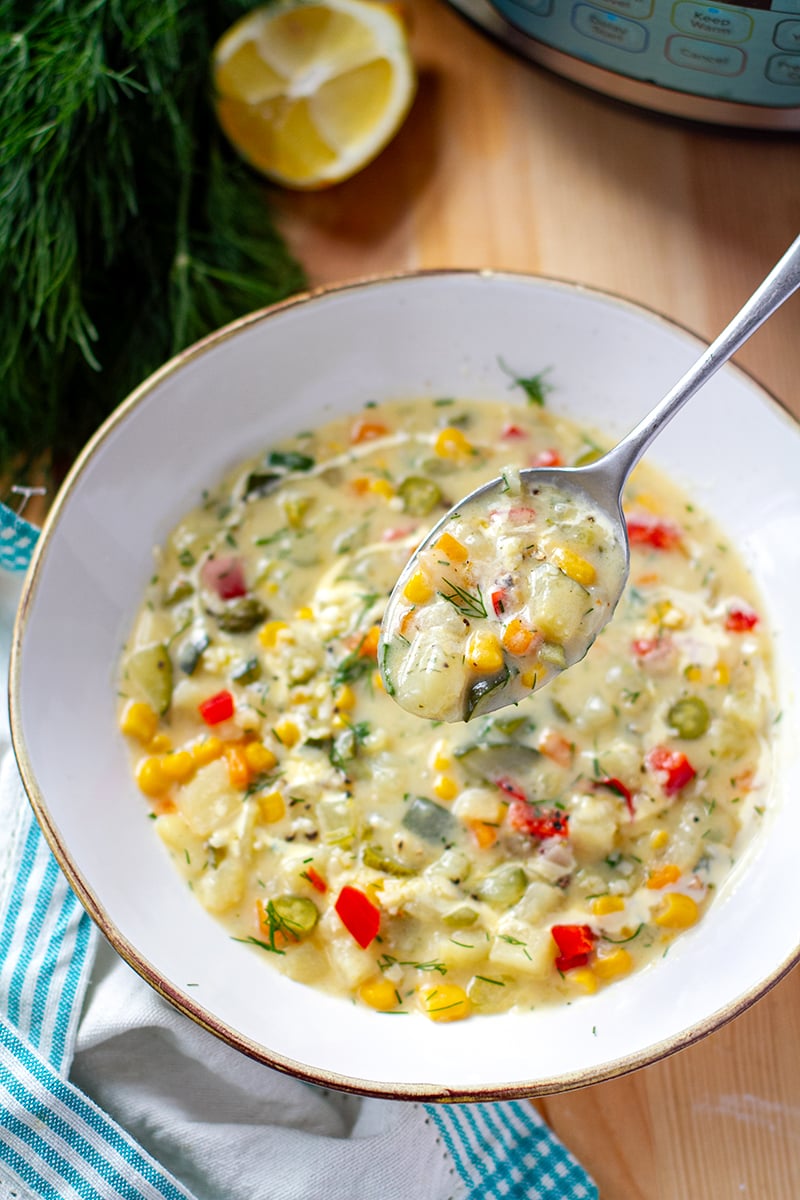 When you think of comfort food, a good hearty soup or stew always come to mind and chowder is always on top of the list. This popular soup is often made with clams or seafood and potatoes and has European and English origins; however, it has become known as part of North American cuisine, especially the New England and Atlantic coastal areas.

There are many variations of chowder and while traditionally it was thickened with crackers or stale bread, today, most recipes call for a flour roux or a starchy slurry and have a milk/cream base. Many add cheese and the potato itself adds a lot of starch that thickens the soup. Our Instant Pot chowder recipe uses white potato as the base but we wanted to load it with lots of other vegetables like carrots, celery, zucchini and peppers. We’ve got corn for sweetness and texture and a twist of diced pickles and fresh dill added right at the end.

If you’ve never had a dill pickle soup, the idea of it might seem strange but trust us, those pickled gherkins really add something special to this soup. Once cooked, this vegetarian-friendly chowder (lacto-vegetarian) is thickened with cream, cheese and tapioca flour slurry, which makes it gluten-free, too.

HOW TO MAKE INSTANT POT CHOWDER

You will find the full list of ingredients, instructions and nutritional breakdown for this soup in the recipe card below. Making the soup is really easy and only takes 30 minutes. Here are a quick video and step-by-step photos to guide you along. 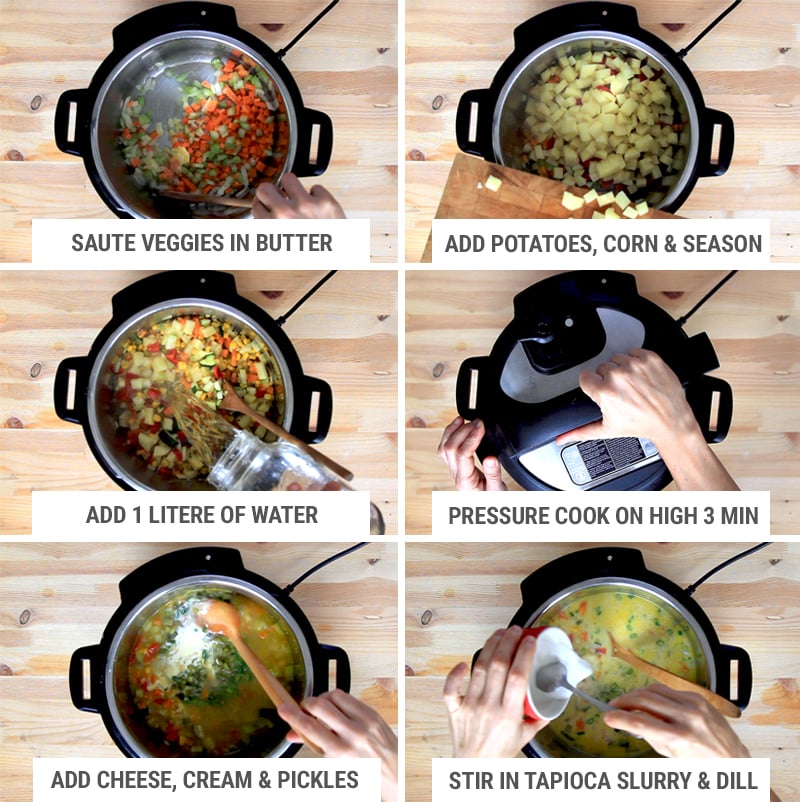 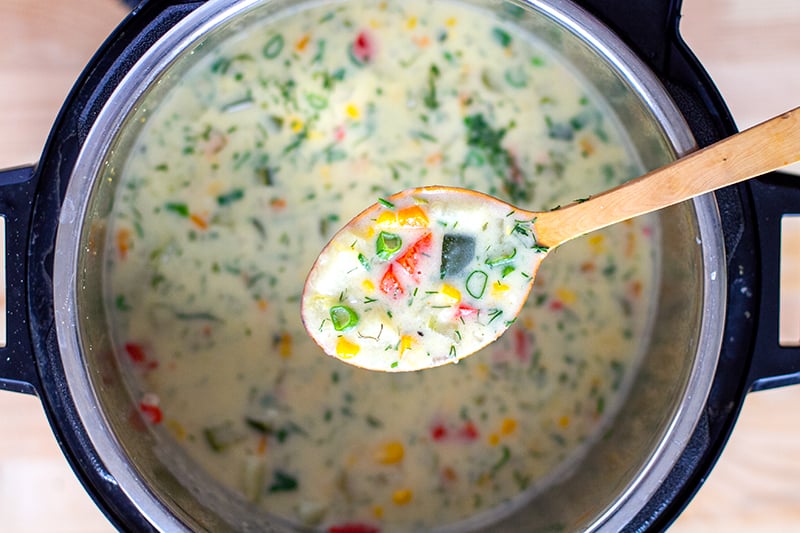 CAN I FREEZE CREAMY CHOWDER SOUP?

Creamy soups like chowders don’t freeze well as they contain milk or cream, which can separate and create a grainy texture. The best way to freeze this soup is to hold back the pickles, cream, cheese and fresh dill. Cool the soup completely and store in the freezer for up to 3 months. Once defrosted, reheat and THEN add the finishing ingredients.

CAN I MAKE A VEGAN OR DAIRY-FREE CHOWDER?

This particular potato chowder works best with cream and cheese, especially if you pair it with pickles and fresh dill. You can use a few alternatives: 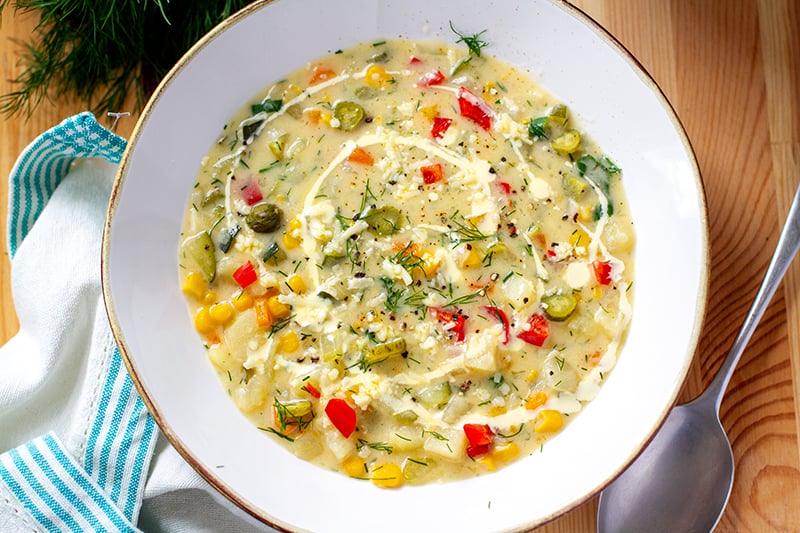 Gluten-free and vegetarian-friendly Instant Pot chowder made with potatoes, sweet corn and dill pickles and loaded with vegetablbles. It’s creamy, chunky and super delicious, perfect for a midweek dinner as it only takes 30 minutes.

2 vegetable stock cubes (we use this brand)

2/3 cup low-fat double cream (half and half)

To help thicken the soup, we used tapioca flour dissolved in a little water. This is called a slurry and is an alternative to flour roux. This mixture is added right at the end. You can use arrowroot flour, cassava flour, or any other gluten-free strach you have on hand. 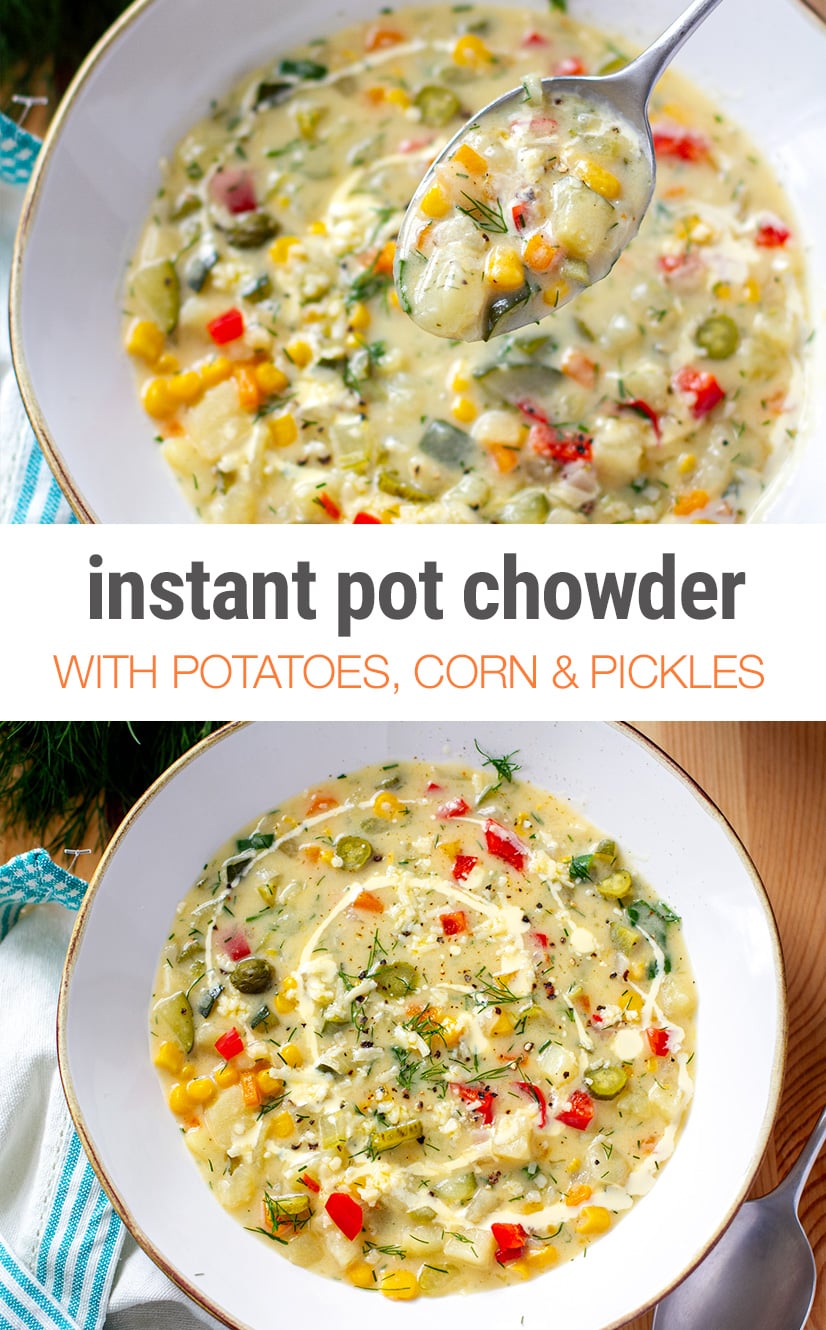