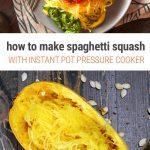 Spaghetti squash is a truly amazing vegetable. Standing on its own two legs amongst the other varieties of fall and winter squash, this little ball of sunshine has a little something different going on inside. It gets its name from its uncanny ability to basically turn into spaghetti with a little heat. Here are some tips on how to make Instant Pot spaghetti squash. 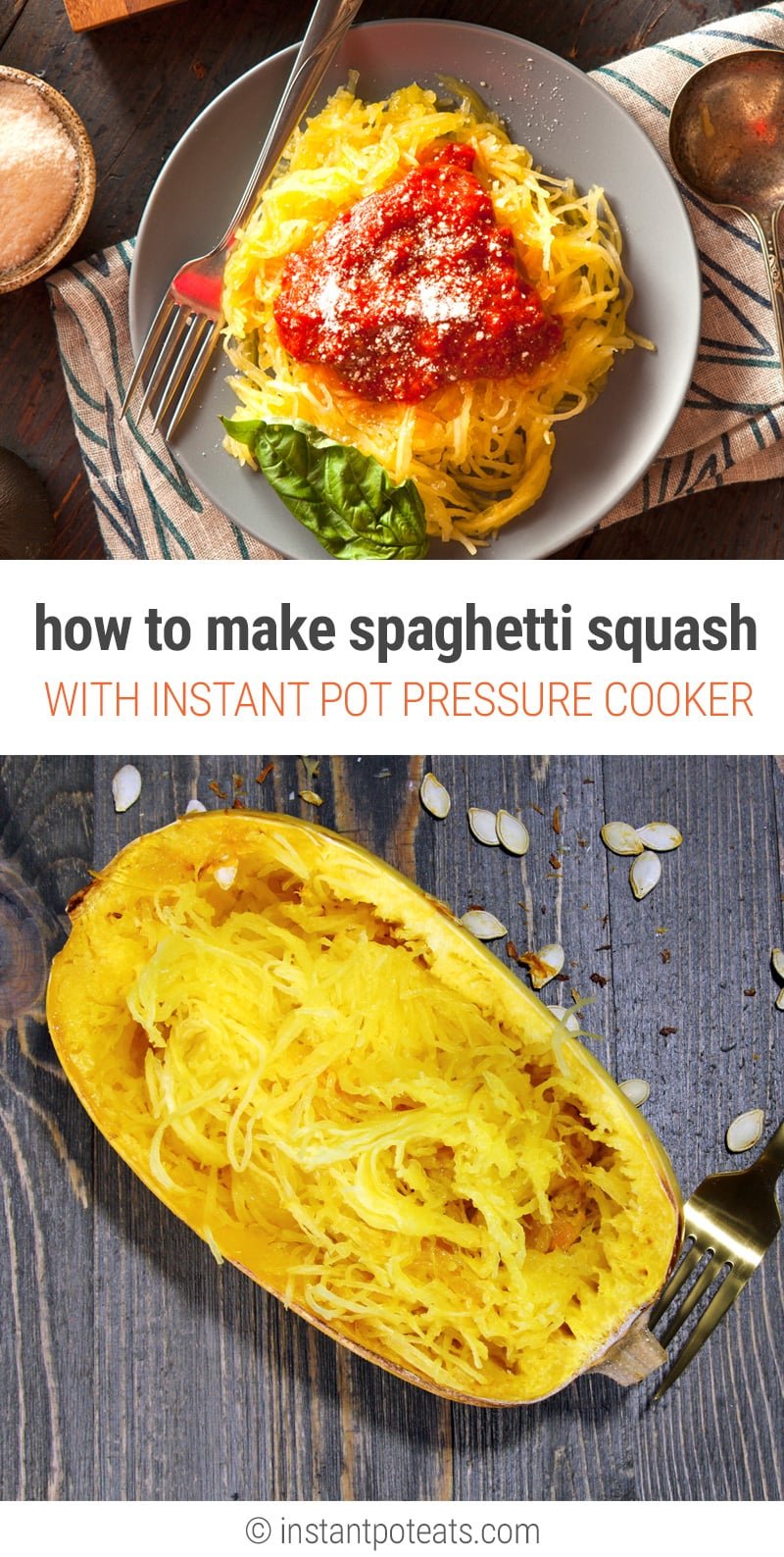 Most other winter squashes are considered starchy vegetables, but spaghetti squash isn’t so much.

In fact, it’s very low in carbohydrates and calories while being high in fibre and nutrients. With only 20 grams of carbs per 2 cups of cooked squash (and 5 grams of fibre), you’ll be able to enjoy this vegetable with a delicious sauce or as a low-carb side.  Whether or not you’re cutting carbs, there’s no denying that it’s delicious!

Spaghetti squash can take on the flavours of just about any classic pasta dish while cutting back on carbs and calories big time. Beyond that, it’s grain-free and gluten-free, so it’s suitable for a paleo diet, gluten-free eaters, and vegan recipes too. It hits ALL the notes. Finally, you can make it in the Instant Pot. 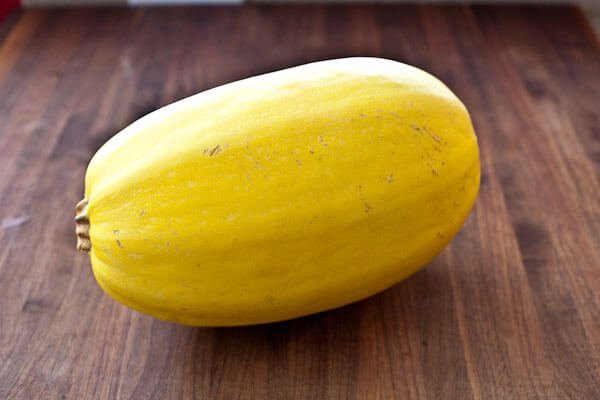 Spaghetti squash is typically made in the oven. While it works out just fine, for the most part, it takes a long time! Another option is nuking it in the microwave, but I think we can all agree that things taste better when they’re not made in the microwave, not to mention the controversy around using one in the first place.

The other option is – you guessed it – making spaghetti squash in the Instant Pot. It’s even faster than the microwave, and the results are perfect. Let’s talk technique. 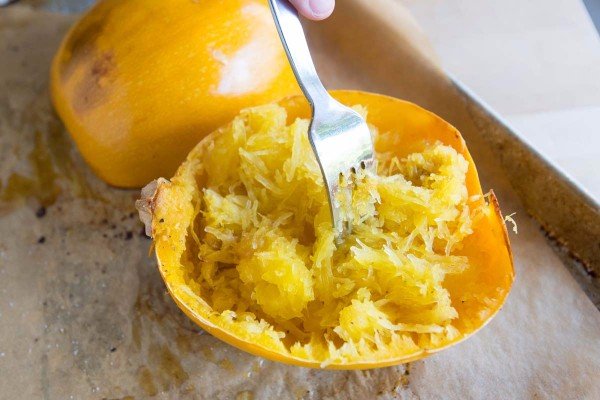 First, let’s talk about some pro tips! You can always cut your spaghetti squash lengthwise like in the photo above, but you’ll end up with shorter strands. This is fine as it doesn’t impact the taste at all, but it will impact how much the squash resembles spaghetti. If you’re going for the most authentic pasta substitute, cutting it crosswise (as shown below) is ideal for long noodles you can twirl on your fork.

Another tip is NOT to cook the spaghetti squash whole. First and foremost, it takes longer. You’ll likely want to double the time, aiming for around 13-14 minutes on ‘HIGH’ pressure for a whole squash.

Secondly, while you’ll skip out on the arm workout from cutting the squash beforehand, you will likely be frustrated when the seeds are baked into the squash. This makes it difficult to scoop them out. You’ll also end up wasting some of the precious flesh in the process of doing so.

WHAT TO SERVE WITH SPAGHETTI SQUASH

Cooked spaghetti squash can be shredded with a fork and flavoured with a little salt and pepper. That’s as simple as it gets and can be used as a side dish with pretty much anything. You can also drizzle it with a little oil or melt some butter into it. The fats will help your body to absorb all those fat-soluble vitamins in the squash. I like it with a little grated Parmesan on top.

As a base, the squash is super versatile. It can be used instead of spaghetti or noodles with your favourite sauce on top. Try our Instant Pot Bolognese Sauce or this amazing Vegan Moroccan Chickpea Stew.

You can incorporate it into casseroles, like this low-carb, cheesy number, this meat sauce based one, or this vegan casserole.

Another idea is to stuff the cooked spaghetti squash halves with a filling such as cooked quinoa, taco meat, shredded chicken or stir-fried tofu. 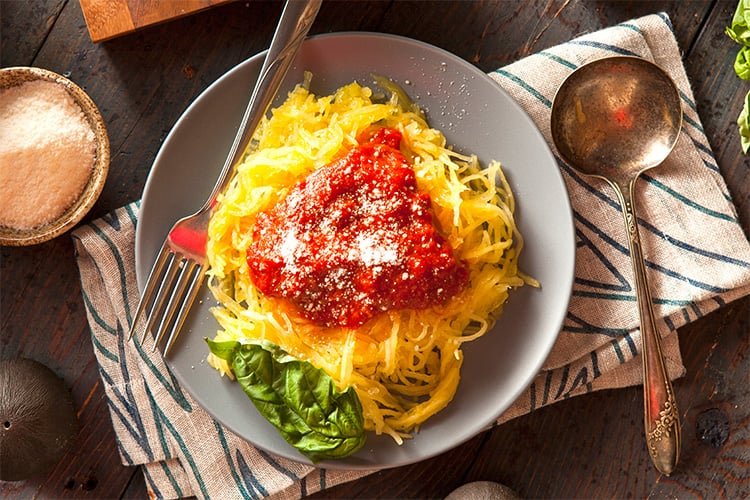 With just two ingredints – water and the vegetable – this spaghetti squash Instant Pot recipe is as easy as the come. Serve the cooked squash with your favourite pasta or use as a side.

1. Cut the spaghetti squash in half down the middle – crosswise, not lengthwise! This will help you remove the strands so that they resemble spaghetti better later.

2. Remove the seeds and stringy squash from the middle of the squash.

3. Use a steamer basket or the trivet that comes with your Instant Pot, and insert into the Instant Pot.

4. Fill the Instant Pot with the cup of water. Place the squash halves into the pot.

7. When the pressure cooker is finished doing its thing, release the pressure manually (quick release) to prevent further cooking a.k.a. mushy squash!

8. Let the squash cool enough to safely handle, then “shred” with a fork to serve.